My friend, J.D. Wininger asked the question, "Where do you look for God?" J.D. reminded me of a time when I saw God in many common place things. Here's an example.

On one Sunday after worship, the church showed a video promoting a bus trip to see the Christmas Show at Radio City Music Hall in New York City. The video showed Christmas trees. It wasn’t my fault those trees urged me to look at the large white pine outside the windows over the pulpit. Fall in the Catskills brings color everywhere. So what’s the big deal about the pine tree?

Everyone knows we call them evergreens. Deciduous trees like maples, oaks, and cottonwoods branches reach up in yearning, but an evergreens configuration points to God. They’re a constant reminder of where to turn when you have an issue. This week they are not all green. They have brown needles, primarily on the ends of the branches where new growth occurs. Like the broader leaves of the hardwoods, the pine needles also fall to make room for new growth.

The sermon spoke about the difference between being saved and doing works. The message came from Matthew 14 where Peter climbs out of the boat at Jesus’s word, “Come.” There was work involved in Peter’s faith, yet, while in the process of such work, he failed according to Jesus’ remark. “Oh ye of little faith, why did you doubt?” It seems Peter believed well enough, but even the strongest faith of the twelve (eleven others stayed in the boat!) failed to succeed.

When I saw the pine tree with its brown needles it reflected the failures in my life. But those failures were based upon what I did, in the past, with little faith. Every time those needles fall, creation for more room of productive needles occurs. The process always intends to get closer to Him.

Stop and take a look with me at those brown needles. Use them not as reminders of things past, but as harbingers of new opportunities to put your faith to work, always with Him in mind.

Here's a post not many had the opportunity to read. 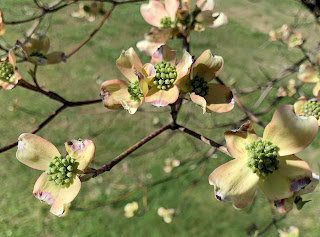 An interesting legend involving the dogwood tree involves Christ crucified on the wood from one. It’s not true because there were no dogwoods in Israel during His time. Still, the legend persists because of the flower characteristics. Four white petals, each with a reddish spot, signify the cross and the nails.

Our dogwood, likely planted in 1958 when our house was constructed, blossoms this time of year in South Carolina. Its maturity ensures a large crown of majesty and this year was to be no different. We looked forward to enjoying the show.

This year it’s different. Last night the temperature dropped to below freezing and all of those little buds about to declare God’s gift to us, perished. Here’s a photo from this morning where the temperature is still not above forty degrees F.

Plants show wonderful recovery from atmospheric and natural causes of injury. Trees can survive up to two years of leaf loss, either through drought or infestation. Fire, on the other hand, destroys any possibility of recovery.

I pray on this day of remembrance of Christ’s sacrifice we take the time to acknowledge God’s sovereignty in our lives and recall how our nation was founded on Judeo-Christian principles. Some of those principles found in the Bible include God’s correction for a people wandering far from His love, many times with fire and brimstone. May God grant the United States one more time of reprieve. One more chance to turn the tide. One more opportunity to turn to Jesus and accept the legendary love of God by observing the flowers of the dogwood.

"...rest humbly in the hope authorized by the Divine teachings, that the united cry of the nation will be heard on high and answered with blessing no less than the pardon of our national sins and the restoration of our new divided and suffering country to its former happy condition of unity and peace."

This passage from Abraham Lincoln should sound like it came from your preacher last Sunday, or yesterday. Read it today and consider how far we've fallen. Then pick yourself back up and get back on the trail of God's love. Never been there? See John 3:16.

A book review: The Third Target by Joel Rosenberg

Warren writes snapshots of common things. Whether it's devotions for men, current events, or novels, his unique perspective allows you to see life around you. 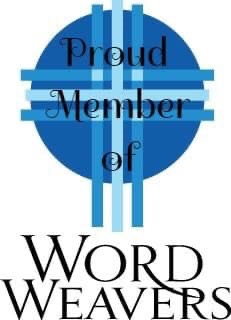